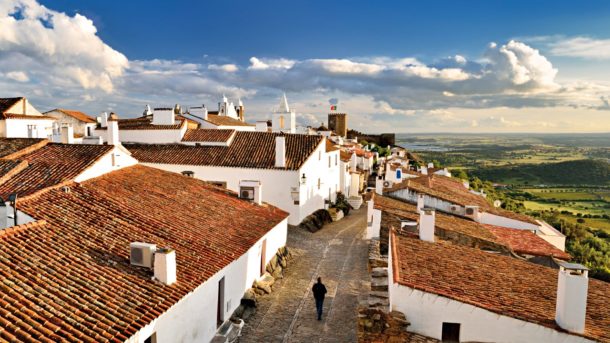 The Alentejo is the breadbasket of Portugal, makes half its wine and is the largest producer of cork in the world. We round up the region’s best restaurants, vineyards and places to stay.

Food is important here in Alentejo,” says Gertrudes Alfacinha. “But only good food!” My host is one of the city of Évora’s official guides, a passionate diminutive historian who likes to take guests to lunch at one of the many small restaurants tucked down the travessas of this labyrinthine city. Our table is strewn with saucers of olives, cheese, tiny squid, black pork and garlic butter. This, a meal in itself, comes standard with the table.

“Anything you touch you pay for,” Gertrudes warns, but we pretty much touch it all as we discuss the Alentejo’s capital, a Unesco world heritage site. History and food are what Évora has in abundance. Plus wonderfulwine – and shops selling cork products.

The Alentejo (literally “land beyond the Tagus”) is a warm, dry, mostly gentle region north of the Algarve that has been ignored by all but a few. A long history of turbulence means many of its towns are on hilltops – not just Évora but the medieval village of Monsaraz on the Spanish border, the baroque Montemor-o-Novo above the main E90 from Lisbon, and the pantiled city of Beja in the south.

This big fertile region, a third of the country by area, is known asPortugal‘s gastronomic soul. The food is neither peasant nor sophisticated, but rich with ingredients such as sheep’s cheese, black pork, salt cod, wild mushrooms and asparagus. Towns have their own specialities, such as peppery olive oils or egg-yolk based desserts. It’s this rich individuality that makes Alentejo special – and the fact that it produces almost half of Portugal’s wine.

Now the region is being touted as the new Tuscany, or the affordable Tuscany. Certainly it’s just as food-orientated, and entry-level wines are better value than in Chiantishire. Architecturally, the Alentejo also has an abundance of Roman remains: Évora has city walls, a huge aqueduct and a temple dedicated to Augustus.

After the Romans, the Visigoths and then the Moors ruled the Alentejo. Its rich soil helped make it famous, and when the Jesuits arrived in the 16th century, they boosted the viticulture and transformed cities like Évora with their florid architecture. So why has this beautiful, fecund, food-orientated region been neglected by the Brits? Maybe it’s because we think of Portugal in terms of Lisbon and the Algarve. The Alentejo, as the land that lies between those two popular tourist attractions, is too easy to overlook, despite its size.

Beyond Évora – where I’m finishing my meal with an egg-and-almond dessert called toucinho rançoso dos santos (rancid lard of the saints!) – the region has much to offer the food lover, as well as culture, countryside and cork. Time to work off those calories.